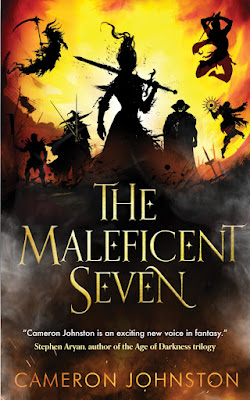 When you are all out of heroes, all that’s left are the villains.

Black Herran was a dread demonologist, and the most ruthless general in all Essoran. She assembled the six most fearsome warriors to captain her armies: a necromancer, a vampire lord, a demigod, an orcish warleader, a pirate queen, and a twisted alchemist. Together they brought the whole continent to its knees… Until the day she abandoned her army, on the eve of total victory.

40 years later, she must bring her former captains back together for one final stand, in the small town of Tarnbrooke – the last bastion against a fanatical new enemy tearing through the land, intent on finishing the job Black Herran started years before.

There's never a lull in the action, and the mismatched group provides plenty of fun, with high tension and biting arguments between the over-the-top characters keeping the pages turning... fans of grimdark fantasy will find plenty to enjoy﻿.

Like Joe Abercrombie was persuaded to write a Warhammer novel. It's dark and often brutal, but with a vein of intelligent playfulness running through...Cameron Johnston remains wickedly inventive...Soaring and magical, yet somehow very human and accessible

"A fun, thrilling, and bloody novel filled with interesting characters and a unique world...You'll be begging for more of Black Herran and the gang"

Like Kings of the Wyld smooshed together with Suicide Squad into a glorious, gory, sweary melee.

- Rob J Hayes, author of The Ties that Bind series

A fun romp of a novel. Recommended.

Like Joe Abercrombie was persuaded to write a Warhammer novel. It's dark and often brutal, but with a vein of intelligent playfulness running through... Cameron Johnston remains wickedly inventive... Soaring and magical, yet somehow very human and accessible.

"Johnston has flipped the magnificent seven samurai trope on its head in this snarky romp of a tale. Packed with heart and humour, The Maleficent Seven is dark, bloody, and the most fun I've had in ages."

- Devin Madson, author of We Ride the Storm