The news is out! My new book, The Maleficent Seven, will be published next year by Angry Robot.

Black Herran was a dread demonologist, and the most ruthless general in Essoran. She assembled the six most fearsome warriors to captain her armies: a necromancer, a vampire lord, a demigod, an orcish warleader, a pirate queen and a twisted alchemist. Together they brought the whole continent to its knees... Until the day she abandoned her army, on the eve of total victory.

Forty years later, she must bring her former captains back together for one final stand, in the small town of Tarnbrooke: the last bastion against a fanatical new enemy tearing through the land, intent on finishing the job Black Herran started years before.

Posted by Cameron Johnston at 11:31 4 comments:

I have signed a contract. A new book is officially happening!
More news at some later point, when I can actually go into more detail...
Posted by Cameron Johnston at 08:59 4 comments:

Just for some fun, SPFBO judge Timy has rounded up a bunch of authors (no idea who!) to write a free serialized story.

Read Part 1 of 'The Butcher Queen', as I kick off this season of To Be Continued...

I started off this story, but other authors will carry it on and finish it - I have no idea how this story will end, but I can't wait to find out!


Posted by Cameron Johnston at 16:48 No comments:

Coming on February 18th from Főnix Könyvműhely - the Hungarian translation of God of Broken Things.

It's always incredibly cool to see my writing published in other languages, though it feels deeply odd I can't read it. 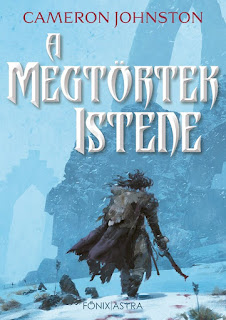 Posted by Cameron Johnston at 09:13 No comments:

This week sees my first ever Warhammer 40,000 story published by the Black Library, Games Workshops' fiction publishing arm: Faith in Iron, A short story about the Iron Hands space marines, a Nurgle plague, and terrified guardsmen caught in the middle. 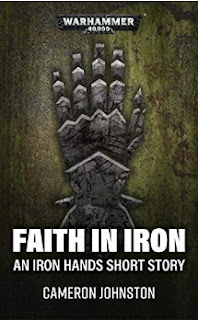 The tech-priests of the Adeptus Mechanicus eschew the weakness of flesh, preferring to show their faith in the Omnissiah by replacing their organics with machine parts. As well as religious, this is practical – disease can't affect the machine… or can it? On the agri-world of Dundas II, Tech-Priest Viridan Shale is dealing with a deadly outbreak brought to the world by the Death Guard. Nothing is safe as the contagion affects flesh and metal alike. With both biology and machinery under threat, she must find a way to defeat the plague and survive. The arrival of Iron Hands Space Marines – who similarly strive to overcome the weakness of flesh – may prove key to the world's salvation… if they are willing to aid Shale and her allies.