On Friday I took my first ever lesson in blacksmithing. Now that my arm can bend again I thought I would do a little write up of the experience, because it was a damn cool one that I would recommend to everybody. There's something hugely appealing and almost magical about heating and hammering red-hot metal into shape.

For the first project I was forging an iron coat hook from a long rod of metal. We were shown the forge (a small modern gas one rather than charcoal and bellows) all the various hammers, tongs and tools and the square rods of iron we were going to be beating into shape. 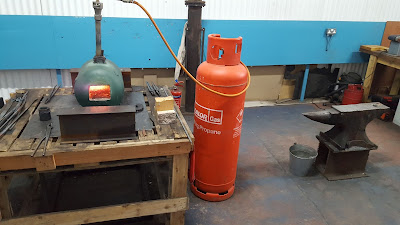 The first step was getting a feel for the metal and the hammers and begin drawing the iron out (making it longer and thinner). We heated the iron until it was a hot and glorious yellow and then placed the end on the anvil, hammering it five times on one side, rotating 90 degrees and then another five, alternating back and forth in order to keep the existing shape. Rinse and repeat until the the metal turned from yellow to red and faded back to black, then it was time to re-heat and do it all over again.

Once I had it down to a thinner length of metal it was time to take off those square edges and make it round instead. More delicate work with a lighter hammer but it proved to involve just as much arm-work.

Next it was time to curl the tip round into a decorative shape. Which was much harder than it looked, involving delicate taps with a hammer to draw it towards you, and some straightening wonky bits with tongs and hammering. 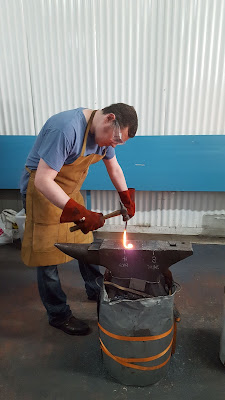 Once that was done it was time to fashion the flat plate where we would be putting in the screw/nail hole. Mostly that involved a heavier hammer and beating merry hells out of it until it was flat enough. Then it was time to use a punch to make the hole and a chisel to hammer a line into the metal above the hole, so we could snap off the unused length of iron rod. Some grinding and cleaning up with power tools and the coat hook was a splendid silver colour.

Then I decided to heat temper the iron to give it some lovely colour. Basically, to heat it up in the forge again, with different time and temperatures granting different oxide effects, going from deepening shades of gold through purple and blue and back to silver. At this point even a single extra second under intense heat can mean blue instead of gold - which you can hopefully see from the top and bottom and the slight golden colour in the centre. 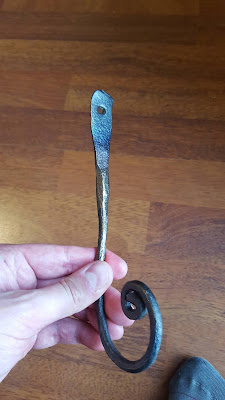 It was hard, hot and sweaty work, but oh so satisfying!

Posted by Cameron Johnston at 15:18

Email ThisBlogThis!Share to TwitterShare to FacebookShare to Pinterest
Labels: Blacksmithing